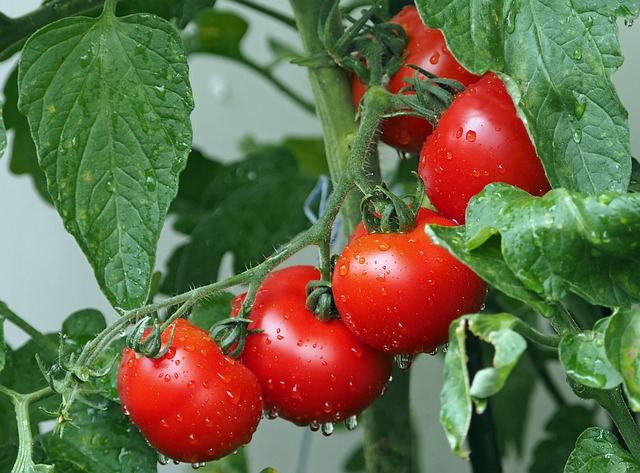 Most tomato varieties, whether they are determinate or indeterminate, are grown as annuals. Though smaller cultivars are better adapted to container growing, you can grow indeterminate tomatoes in pots. This makes them very suitable for growing on your balcony.

What is the difference?

According to Backyard Gardeners Network, determinate tomatoes grow more like bushes, which is why they are sometimes called “bush tomatoes.” They will grow until they reach a certain height and then stop. And they tend to be shorter and less spread out than their cousins that grow long vines.

Determinate varieties produce fruit at the same time, so you get a big crop of tomatoes all at once. Once the plant is done making fruit, it will start to die back slowly.

Indeterminate tomatoes, also called vining tomatoes, stay true to their wild roots as nightshade that spreads across the Andes. They don’t have a set height, and the plant will keep growing throughout the season, sending out new branches until frost kills it.

Smaller groups of fruit grow and ripen all season long, starting at the bottom. As the plant grows, it will keep sending out new flowers until the plant is killed by frost.

Which one is better suited for growing on the balcony?

Tomatoes should be grown on the balcony in pots that drain well and are stable. Remember that many fruits and stems can cause plastic or other light pots to fall over when the wind blows.

Determinate tomatoes are usually the better choice if you intend to grow your tomatoes on the balcony. People often advertise determinate tomato plants with names like “container,” “bush,” or “patio.” Because they are smaller, they do well in pots, small spaces, and in the garden.

Once the first round of fruit is gone, the plant will quickly get worse. For more tomato crops, you can succession plant, which means to plant more, or if you do not want to replant them, you can grow something new in your containers.

What makes determinate tomatoes good for growing on the balcony?

People who live in places where the growing season is short should grow determinate tomatoes. When time is of the essence, you can’t wait for a plant to spread out and put more effort into growing its territory than making fruit.

Once they start making fruit, determinate tomatoes stop growing, and most of them do this before their cousins that don’t stop growing. This means you get a lot of tomatoes all at once before the season ends. They are a good choice because most of them can be picked early, so you still have time to grow tomatoes before it gets too cold.

Large harvest at once

If you want a lot of tomatoes all at once, you should grow determinate tomatoes. For example, if you want to preserve tomatoes by canning, cooking, or making your own tomato paste, passata, or any other kind of sauce made from tomatoes, or you need a lot of tomatoes to be ready at the same time.

You may want to grow food on your balcony but, at the same time, only wanting a little shade on it or other plants. Most determinate varieties reach a maximum height of between two and four feet, making them the best tomato to grow if you want to avoid shade. Because of this, they can go anywhere in the garden without casting much shadow on their neighbors or your balcony.

Little to No Pruning

When growing crops on your balcony or your patio, you want crops that require less attention and physical tendering because of the space. Being on the balcony farm too much may interfere with some of the plants’ progress.

Most of the time, all a determinate tomato needs is a pinch-back here and there. They only grow one big set of fruit, so if you prune them, you might cut down on their yield. Determinate tomatoes are the most likely “set it and forget it” tomatoes you can get.

Varieties of determinate tomatoes good for the balcony

These determinate tomato varieties are some popular varieties that urban farmers love growing on their balconies: